We are the invertebrate neuroethology lab at the University of Minnesota, in the Departments of Entomology and Neuroscience. Our lab group is broadly interested in understanding the neural mechanisms underlying behavior in arthropods and other invertebrates. We are currently investigating a wide variety of research questions, using the medicinal leech (Hirudo verbana), Floridian wolf spider (Hogna lenta), Arizona bark scorpion (Centruroides sculpturatus), and tobacco hornworm (Manduca sexta) as model organisms. There are many advantages to using these invertebrate model systems, including the ability to track the development and behavior of individual identified neurons from animal to animal.

Much of our research focuses on the modulatory role of the biogenic amines, in particular dopamine (DA). Dopamine is a universally important modulator of many behaviors and other phenomena, including motor control, reward and motivation, learning and memory, decision making, vision, chemosensation, courtship, sleep and arousal, circardian rhythms, and many others. Though the ongoing projects in our lab are diverse, they all strive to better understand how dopamine and other biogenic amines modulate the neural networks that generate behaviors.

The projects in our lab take an integrative approach to answering outstanding questions in the fields of neuroscience and entomology at multiple levels— individual cells, neural networks, systems, and whole organisms. To do this, our research incorporates aspects of organismal biology, ethology, physiology, neuroanatomy, neurodevelopment, evolutionary biology, and neuroengineering. Techniques used in our lab include behavioral assays, intra- and extracellular electrophysiology, intracellular dye injections, immunocytochemistry and histology, pharmacology, transcriptomics, and confocal microscopy.

Below is a summary of several ongoing projects in our lab: 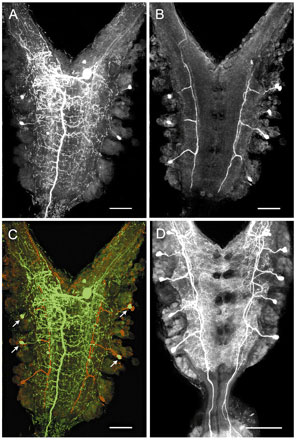 Dopamine (DA) is an important and universal modulator of motor control, but neuroscientists have yet to determine precisely how DA-containing neurons and their targeted circuitry choreograph specific locomotor programs. Related to this issue of locomotor regulation is the idea of decision-making, and how one form of behavior is selected instead of another— e.g., the choice between crawling vs. swimming. Our lab is investigating such important questions at the level of single identified neurons, often at times while the intact animal is behaving. The simpler nervous system of the leech Hirudo verbana was selected for study because it contains relatively large and physiologically accessible neurons and a hierarchical circuit organization, thus facilitating studies of locomotion, body movement, and descending control. Specifically, we are now characterizing constituents of the pattern-generating network underlying crawling-related behavior, and determining how DA changes the properties of neurons to facilitate their participation in crawling. This approach often leads us naturally to an understanding of the neuronal bases of decision-making. Through experiments on this subject, we have found that swimming is inhibited whenever DA triggers crawling. We use a variety of behavioral, electrophysiological, anatomical, and computational methods to study how DA promotes crawling behavior. Recent studies have revealed how unit oscillators for locomotion are coupled through long-distance and local connections. Our simpler neural networks are perfect for investigation by graduate and undergraduate students as the neurons we study are relatively accessible for experimental analysis and research questions can bee addressed at the level of the intact organism down to the level of single neurons and the cellular & molecular machinery that enables them to participate adaptively within their networks of operation.

Mechanisms of Recovery Following Nerve Cord Injury in the Leech

Recently researchers in our lab group have begun examining the neural mechanisms underlying recovery from serious nervous system damage, using the medicinal leech (Hirudo verbana) as a model. We have found that transections to the ventral nerve cord of the leech initially produce noted deficits in crawling behavior and coordination between individual body segments. Quite remarkably, however, leeches that undergo such injuries have been observed to recover their ability to crawl over time. We are now investigating how the nervous system changes in injured leeches to lead to this recovery, as well as the roles of the biogenic amines in the recovery process. This research has numerous important medical applications, and may provide valuable insight into treatment options for spinal cord injuries in humans. 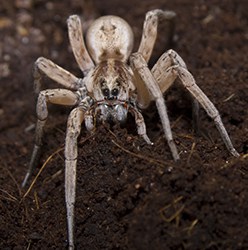 With the arrival of arachnophilic Ph.D. student Anthony Auletta into the lab, we have begun an exciting new project on the distribution and functional roles of biogenic amines in the central nervous system (CNS) of spiders and other arachnids. With over 100,000 described species, arachnids are the second most diverse group of organisms on the planet (after insects), and they display an equally diverse array of interesting and complex behaviors. Arachnids are also some of the most frequently encountered organisms in nearly every habitat, with many species being economically, ecologically, or even medically important. However, despite all of these compelling reasons to study arachnids, relatively little research to date has focused on the neurobiology underlying their behaviors.

Using the Floridian wolf spider Hogna lenta and the Arizona bark scorpion Centruroides sculpturatus, as well as a number of local spider species, we have set out to understand the evolution of neuromodulatory systems in the Arachnida. We are especially interested in the distribution and functional roles of catecholamines (dopamine and related compounds) and octopamine in the arachnids, and how this compares to catecholaminergic and octopaminergic systems in other invertebrates. We are the first researchers to describe the distribution of catecholamine-synthesizing neurons in the CNS of any arachnid (publication in progress), and now we are using a combination of neurophysiology, pharmacology, and behavioral methods to better understand the modulatory roles of catecholamines and octopamine. These experiments will fill an important gap in our understanding of arachnid biology, by constituting some of the first studies to investigate the neural mechanisms underlying arachnid behavior. For more information about this project, please contact Anthony.

For her dissertation research, Ph.D. student Morgan Newhoff is utilizing tractable invertebrate model systems to assist in the testing and development of neuromodulation technologies. We are currently exploring the cellular mechanisms underlying ultrasound neuromodulation using the large, identified neurons of the medicinal leech as a model system. Our hope is to assist in the development of this promising technology as a potential noninvasive replacement for other neuromodulation therapies. For more information about this project, please contact Morgan. 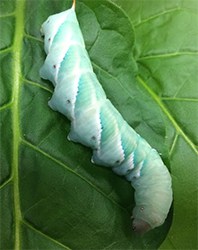 Using insect models, our lab group has conducted extensive research to determine how neurons change during development to give rise to adult-specific behaviors. As the tobacco hornworm Manduca sexta develops from its larval form to its pupal and adult stages, dramatic changes in its nervous system are observed. Some larval neurons (not needed by the adult) undergo developmentally programmed cell death, while others are retained and remodeled; in the process, their morphology and synaptic contacts become altered. In addition, many new neurons are generated de novo and are used only in the adult stage. The goals of these projects are to understand how all of these changes, which are under hormonal regulation, contribute to the “construction” of particular adult behaviors. We have focused on the reuse of larval interneurons and the cellular mechanisms that enable “old” neurons to be incorporated into the adult nervous system to generate new behaviors. As part of this research, we have investigated the developmental roles of the biogenic amines (dopamine, serotonin, and octopamine) as well as developmentally important steroid and peptide hormones.

Development of New Technologies in Neuroscience

An important aspect of advancing the field of neuroscience is the development of cutting-edge technologies and methodologies to help us answer outstanding questions. To this end, our lab has begun a collaboration with a team of neuroscientists and nanoengineers at the University of Minnesota to produce revolutionary new devices that will make recording from neurons in living, behaving animals easier and more powerful. We have also been working with scientists at the U and beyond to develop new microscopy methods that will allow us to image histological samples in ways that were not previously possible.